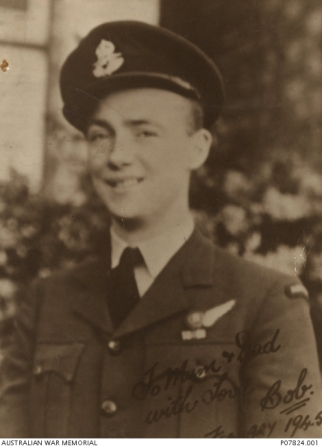 Outdoor portrait of 424640 Flying Officer (Flg Off) Robert Martin of Balmain, NSW. A shop assistant before enlisting in June 1940, Flg Off Martin has originally enlisted in the Second AIF (serial number NX34567) and served in the North Africa campaign with the 2/9 Field Regiment, which included participation in the Siege of Tobruk in 1941. After transferring to the RAAF in October 1942, he trained as a bomb aimer as part of the Empire Air Training Scheme (EATS) and was posted with 630 Squadron RAF based at East Kirby, Lincolnshire, England. Flg Off Martin was one of seven men killed on the morning of 9 April 1945 when his Lancaster bomber, serial number ND949 (radio call-sign Z-Zebra), crashed in bad weather at RAF Foxton having returned from an operational sortie over the oil refinery plant at Lutzkendorf, Germany. Flg Off Martin was aged 26 at the time of his death. The ribbon seen on Flg Off Martin's left breast pocket is the Africa Star, denoting his service in the Middle East with the Second AIF in 1941.