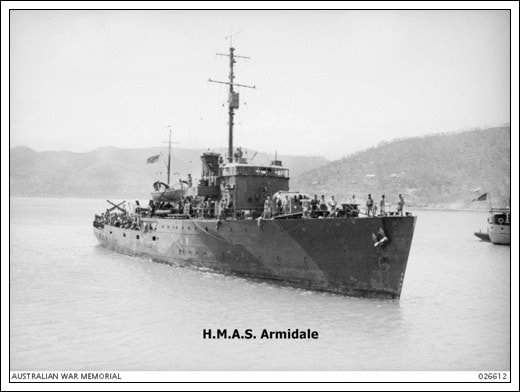 Sunk by Japanese Aircraft 1-12-1942
Queensland Times 26-12-1942
H.M.A.S. ARMIDALE
SUNK NEAR TIMOR
40 Members of Crew Missing
After a desperate fight with a, large force of Japanese bombers, torpedo carriers, and fighters, H.M.A.S. Armidale, an Australian built minesweeper of 928 tons, has been sunk in action in waters near Timor. The Armidale, which was attached to the Australian Naval
Squadron, is the first Australian-built vessel of her class to be lost in action.
Mr. Curtin said to-day that 40 members of the ship's company of 83 are missing. They comprise two officers and 38 men. The remaining 43 members of the crew have been rescued and returned to Australia.
The rescue of survivors from the Armldale provides a brilliant epic of co-operation between the R.A.A.F. and the Australian Naval
Squadron in enemy territory, and under constant enemy attack.
Reports received by Mr. Curtin reveal that there were three days of bold co-operation between the two services in enemy waters to
rescue the 43 men. The Government knew that the Armidale had been in action against a large Japanese air force, and that when
attacked she shot down one bomber and one fighter, and probably shot down a second fighter. First hints that she had been
lost in this action came when radio attempts to communicate with her failed. Although it could not be taken for granted that she had been sunk, simultaneous sea and air searches were begun. The loss of the ArmIdale was confirmed when one of the searching party sighted a drifting life boat containing 17 survivors. The aeroplane immediately directed a naval ship to their rescue.
The Japanese evidently anticipated a rescue effort. They immediately dispatched a large force of aircraft against the rescue ship. Although obliged repeatedly to fight off these attackers, the ship carried out the direction from the searching aeroplane and located the lifeboat, whose personnel, although suffering from exposure, were brought safely to Australia.
Despite Japanese patrols, aircraft continued to search, and three days later they sighted another Ilfeboat carrying 26 men.
Once again the Navy was promptly given its position, and a naval ship was guided to the rescue of the survivors.
All the survivors are now in Australia, and none is suffering seriously from his experience.
The Armidale was commissioned in June, 1942.
Three of the missing are Queenelanders. They are: A/Ldg. Stoker James Frank Harcourt, Stoker II. Ernest Anthony Malone, and Ordinary Seaman Keighley John Mitchell. 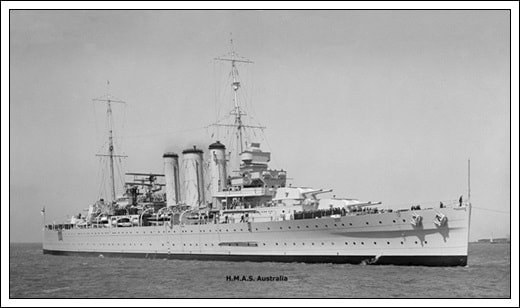 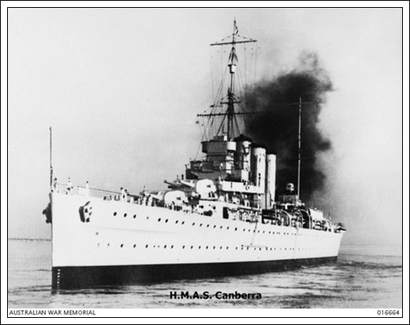 The Canberra Times 21-8-1942
H.M.A.S. Canberra Lost in Action.
SUNK IN SOLOMONS BATTLE
SURVIVORS LANDED AT AUSTRALIAN PORT
THE LOSS OF H.M.A.S. CANBERRA IN THE SOLOMON ISLANDS BATTLE WAS ANNOUNCED BY THE PRIME MINISTER (MR. CURTIN) YESTERDAY. THE GOVERNOR-GENERAL (LORD GOWRIE), ACCOMPANIED BY REAR-ADMIRAL G. C. MUIRHEAD-GOULD, WELCOMED SURVIVORS OF H.M.A.S. CANBERRA ON THEIR RETURN TO AN AUSTRALIAN PORT.
Of the complement of 816 officers and men, the casualties were:
Ten died of wounds, 74 missing, believed killed, and 109 wounded. The captain of the cruiser (Capt. F. E. Getting) is amongst the dead.
The Canberra, a cruiser of 9870 tons, was co-operating with units of the Royal Australian Navy and American naval forces in the battle against the Japanese.
Shells Pierced Both Boiler Rooms
After fighting off continuous attacks from land-based planes from the Solomons, the Canberra sunk in the early hours of the morning of August 9, and the story of her last hours was told by survivors who reach an Australian port.
They also stated that the more seriously wounded had been taken in a hospital ship to New Zealand. The survivors stated that shells crashed into both boiler rooms with the result that there was no steam or light, while the bridge was shot away.
None of the survivors will ever forget the courage of the commander, Captain Frank Getting. He was mortally wounded, but remained directing operations while refusing medical Aid, but finally, although protesting he was carried aboard a rescuing destroyer but died next day. All the boats were holed and the crew was forced to take to rafts. Many acts of individual bravery occurred, including the throwing overboard of a 4-inch shell. Japanese star shells silhouetted the Canberra in the darkness, making her an easy mark. Survivors also told of the terrific air battle which lasted two hours. The ship was attacked by 50 planes and out of one group of 22, no less than 21 were shot down.
Torpedoes Missed
Able Seaman P. D. Mackintosh was working in an aircraft advance post at about 1.30 a.m. on August 9, and gave the first report of the ship being attacked. He saw gunfire. Later, he reported that two torpedoes were running down the port side but they missed the ship. Then a shell hit the bridge, killing a gunnery officer and wounding the captain. Planes were heard overhead but it could not be ascertained whether they were Japanese or British. About 4 a.m., a United States destroyer came alongside and commenced to take off the wounded, but she had to crash away without untying the ropes when another attack was being made. At 6.30, a second destroyer came up and took off the remainder of the injured survivors. 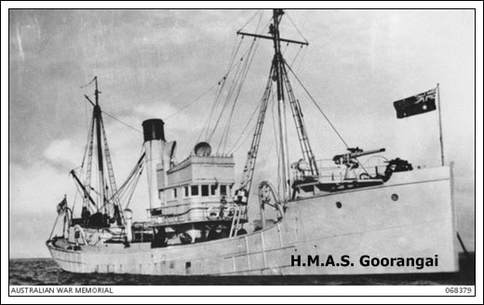 Warwick Daily (Queensland)  22-11-1940
SINKING OF MINESWEEPER
.Collision In Port Phillip Bay
The sinking of the 223-ton minesweeper H.M.A.S. Goorangai, following a collision with a passenger and cargo vessel near Queenscliff in Port Phillip Bay, was announced in the House of Representatives to-day by the Minister for the Navy -Mr. W. M. Hughes.
Mr. Hughes said the accident took place about 9 o'clock last night. Three officers and 21 members of the crew lost their lives. A preliminary investigation by the Director of Navigation had begun. A formal Court of Marine Inquiry would begin probably next week.
Both ships were under way when they collided. The sweeper was changing her berth from off Queenscliff  to off Portsea. The other ship was going out of the Bay. Both carried lights, though these might have been dim. This point would be cleared up at the inquiry. The exact place of the tragedy was about two miles inside the Heads! There was a slight mist at the time but a visibility of two miles.
An unsuccessful search for survivors had been carried out by boats of the other ship, the Queenscliff lifeboat, a military launch, fishing boats and naval craft. All possible steps were taken to get the rescue craft to the spot as quickly as possible, but it was probable the Goorangai sank immediately on being struck.
The Minister extended the sympathy of the Government to the relatives of the sweeper's crew. The Governor General had also asked him to convey his sympathy.
LOSS OF ENTIRE CREW
MELBOURNE, Thursday - Hope of any survivors of the 24 men of the minesweeper Goorangai, sunk in a collision inside Port Phillip Heads' last night, has been abandoned. The passengers and crew in the ship which rammed the Goorangai saw three men struggling in, the water and heard, cries for minutes after the collision.
All buoys and lifebelts on deck were thrown overboard, but by the time the lifeboats had been launched and pulled back against the set of the current the swimmers had disappeared.  Witnesses of the tragedy think that most of the minesweeper's men were trapped below. Those on deck were either sucked down by the vortex when the little Ship sank or were soon drowned by the high seas and the terrific current in the rip.
The water was so wild and treacherous where the Goorangai sank that even the strongest swimmer would have, no chance. The loss of the entire crew makes the sinking the worst shipping disaster on the Victorian coast for 53 years.
A search throughout the/night and to-day was without result. The wreck was located in 50 feet of water with  three feet of the main mast and a piece of the splintered after mast projecting above the surface, but no sign of the ill-fated crew was seen.
The passenger and cargo liner sail ed from her berth in the river at 5p.m. Four hours later she was running blacked out through the most dangerous channel at the entrance when there was a rending crash forward. Officers on watch could have seen nothing of the smaller vessel until it was too late to alter course.  According to some witnesses the liner seemed to crash clean through and pass, over the doomed minesweeper. Those below in the big vessel rushed upon deck believing  that the ship had run ashore. Above the sound of the wind and waves some could hear the cries of the minesweeper's men.
THREE MEN SIGHTED
The merchantman blew her siren, hove to, and immediately launched her boats. Distress flares were burned out-board, lighting the dark surface of the sea with a sickly glare. The heads of three swimmers were seen.
Men at the Point Lonsdale lighthouse recognised the distress signals and sounded the shipwreck alarm. The Queenscliff lifeboat crew under Captain W. Breen immediately tried to launch their boat and she became stuck in the soft sand and had to wait half an hour for the tide. The  life boat reached the wreck three hours later, but could- find only flotsam and the projecting mast of the sunken sweeper. Meanwhile the liner's two boats had searched a wide area under great difficulties and without result. One boat was caught in a terrific current and had to towed back to the ship's side by the lifeboat.
Powerful searchlights from the shore swept the scene of the sinking, but were a hindrance rather than a help as they dazzled the men in the boats. At 2.45 a.m. the lifeboat abandoned the search and returned to Queenscliff. Steamers  and a plane from Point Cook resumed the search at dawn.
PROBABLY CUT IN HALF.
An examination of the slight damage done to the stem of the liner seemed to indicate that it had struck the Goorangai a heavy
glancing blow, probably cutting her in two.  No-one will ever know exactly, what happened on board the minesweeper,
She had been, engaged sweeping Bass Strait ever since the loss of two ships a fortnight ago. She came into Queenscliff at 6 a.m. yesterday after a day's work. When the weather became worse her commander decided to run into Portsea for shelter.
The Goorangai was built in Australia for deep sea trawling. At the outbreak of the war she was converted for war service and operated as a trawler. 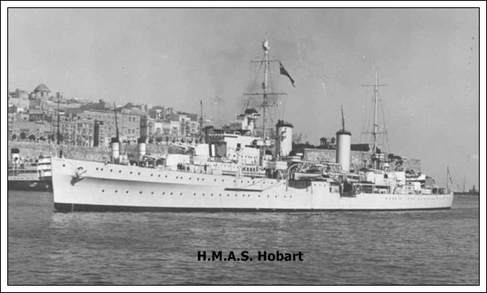 Decommissioned 20-12-1947
Lost at Sea 20-6-1944
Group portrait of the ship's company of the stores carrier HMAS Matafele, a British ship which was taken over and commissioned by the RAN at sea on 1 January 1943. The ship's motto was 'Wok dasol maski lim limbur' which is pidgin and translates to ' All work and no play'. On 18 June 1944, she left Sydney after a refit and was bound for Milne Bay carrying mail and stores; her expected arrival was 22 June 1944. On 23 June 1944 the Naval Depot at Milne Bay sent a radio message which was not answered, and the next day a RAAF aircraft claimed to have seen the small vessel making its way to the Papuan Coast, however subsequent searches found nothing. In late October 1944, a Naval Board of Enquiry concluded that the ship may have been overloaded, had put to sea beyond its permitted 'deadweight' and that it must have foundered. Four officers, 20 other ranks and 13 islanders were lost.