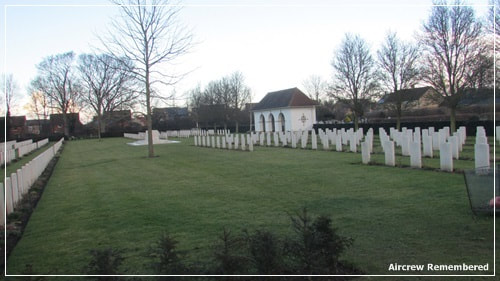 WILLOUGHBY.—On September 8. Flt/Lt. Paul Edward Willoughby R.A.A.F. beloved husband of Muriel, 46 Austral terrace. Malvern.
Pro deo et patria.
The West Australian (Perth, W.A.)  27-3-1945
WILSON. Alexander (FIt-Sgt-Plot,RAAF).-In proud and loving memory of Bill, youngest son of Mr and Mrs J. H Wilson of corner of Kinsella and Banksia streets; Osborne Park; loved brother of Bob. Jean, Jim (RAAF. Pacific) and Mary; loved brother-in-law of Grace. Alb and Harold loving uncle of Alex, Elsie John, Lesley, Merle. Kevin, Rona and Jimmy; aged 21 years.
At those heavenly gates he will meet us with that same seet loving smile.
Our darling boy
The Sydney Morning Herald (N.S.W.)  9-5-1944
WILSON.—May 1, 1944, result of aircraft accident at Norfolk, England, Pilot-Officer Neville Arthur Wilson, beloved husband of Winkie, Northwood, Sydney, aged 29 years.    Per ardua ad astra.
WILSON.—May 1, 1944, result of aircraft accident at Norfolk, England, Pilot-Officer Neville Arthur Wilson, beloved elder son of Mr. and Mrs. A. E. Wilson, Tullamore,
N.S.W., brother of Pilot-Officer M. F. Wilson (R.A.A.F.), aged 29 years.
The Age (Melbourne, Vic)  9-2-1944
Mr. L. G, Wilson, secretary of the State Treasury, and Mrs. Wilson, of 484 Burke-road, Camberwell, have received notification that their son,  Flight-Sgt. Noel Grant Wilson, was killed in an aircraft accident at Hardwlck,- Cambridgeshire, England. He was a Spitfire pilot, and had been In England for about twelve months.
Fllght-Sgt. Wilson, who was 25 years of age, was a former scholar at the Melbourne Boys' High School, and at the time of his enlistment was doing a course of dentistry at the Melbourne University.
The Sydney Morning Herald (N.S.W.)  8-12-1943
WINDUS.—November 27, 1943, killed returning from air operations, United Kingdom, Flight-Sgt. Keith Neville Windus, beloved youngest son of Mr. and Mrs. G. H. Windus, Boxleigh, Gumble, Manildra, and much loved brother of Ken, Laurie, Arthur, Max, Hazel (Mrs. J. Hodges), Ethel, Marjorie, and Daphne, aged 24 years. The supreme sacrifice.
Molong Express and Western District Advertiser (N.S.W.)  21-1-1944
APPRECIATION FROM BRITAIN.
The Late Keith Windus.
Mr. G-. H. Windus, of Boxleigh, Gumble, has received a letter from his late son's Squadron Leader, expressing sympathy with them in their loss.
Tho letter is as follows: — 'No. 626 Squadron, Royal Air Force, Wickenby, Lincoln, 27th November, 1943..
Dear Mr. Windus, — By the time you receive this letter you will have been informed that your son Flight Sergeant Keith Neville Windus lost his life on an operational, sortie on the night of the 26th/27th November, 1943, and I take this opportunity of expressing my most sincere sympathy. Your son was the Captain of a -Lancaster Aircraft which took off on a mission against the enemy. I am sorry to say that after completing the mission, it crashed in Norfolk, and all of the crew were killed instantly. During the time your son had been on this Squadron, he proved himself a capable Captain in whom I had every confidence. He was well liked and will be sadly missed by all. All ranks wish to join with me in offering their deepest sympathies. You have every reason to be proud of your son, for he was doing a fine job of work. Yours sincerely (SignedGroup Captain, Commanding R.A.F. Station, Wickenby).
Mr. Windus has also been advised that his late son was buried with full Service Honours at Regional Cemetery, Cambridge.
Soon after the outbreak of hostilities he enlisted in the A.I.F. in July, 1940; was discharged as medically unfit in March, 1941. He returned home and was his father's rights-hand man with his Merino stud, in which Keith was deeply interested. Feeling that he should again try to do his duty for his country, he enlisted in the R.A.A.F. in July of the same year; had his call up in November and went to Somers, Victoria, and Narrandera for training. He left Australia in June,. 1942- for Canada under the Empire Air Training 'Scheme, that journey taking 8 weeks. He encountered many experiences en route, one of them being an attack by a submarine in the Carrabean Sea. He received his wings on Dec. 4th, 1942, and was attached to the R.A.F. until he met his death.

The Sydney Morning Herald (N.S.W.)  17-2-1945
WINTON.-January 14, 1945, Flight-Sergeant Edward Robert Winton (432928), wireless air-gunner, Lancaster bomber, crashed Lincoln, England, upon return from bombing operations over Germany. Buried in Regional Cemetery, Cambridge.
Dearly loved youngest son of Mr. and Mrs. E. G. Winton, of Kenny Hill, Campbelltown, deeply loved brother of Len, Roy (R.A.A.F.), Daphne (deceased), and Noel, aged 20 years and four months. A tribute to the rest of the crew who lost their lives.
The Cumberland Argus and Fruitgrowers Advocate (Parramatta, N.S.W.) 28-2-1945
AIRMAN'S DEATH,
Official hews has been received of the death of Flight-Sergeant Edward Robert Winton, R.A.A.F., (20), when returning from air operations over Germany.
He was a wireless air-gunner among the crew of the Lancaster bomber which crashed at Lincoln, England, on the homeward journey.,
Flight-Sergeant Winton was a son of Mr. and Mrs. E. G. Winton, of Campbelltown.
The Advertiser (Adelaide, S.A.)  26-2-1944
Mrs. H. R. Matheson, of Barnes avenue, Magill, has been notified that her brother, Flt-Sgt. William Kenneth (Bill) Wood, lost his life as the result of an aircraft accident. He was the pilot of a Lancaster aircraft which crashed at Shillington, England, while on an operational flight. He enlisted in the RAAF in May, 1940. Before he enlisted he was employed at the BHP at Whyalla. Flt-Sgt. Wood was the second son of the late Mr. and Mrs. H. R. Wood, of Whyalla.
Recorder (Port Pirie, S.A.)  28-2-1944
WOOD.-On February 21, 1944, result of air operations, United Kingdom, FLIGHT-SGT. WILLIAM KENNETH (Bill) WOOD, second son of the late Mr. and Mrs. H. R. Wood, and dearly loved brother of Cyril (R.A.A.F.), Betty, Peggy, and Bert. Aged 29 years.
PIRIE BOY KILLED OVERSEAS
Flight-Sgt. W. K. Wood ,
Relatives have been notified that Flight-Sgt. William Keith Wood, of the Royal Australian Air Force, lost his life on February 21 as a result of air operations in England. He was pilot of a Lancaster aircraft which crashed at Shillington. Flight-Sgt. Wood, who was 29 years of age, was born in Pirie, and was the second son of the late Mr.
and Mrs. H. R. Wood. He was educated at Solomon town School and Pirie High School, and prior to enlistment had been employed in the store and timekeeper's office of Broken Hill Proprietary Company Limited, Whyalla. He played football over the gulf, and for a time , was secretary of Central Football Club.
One brother, Leading Aircraftman Cyril Wood, is also in the air force, and the only other, Mr. Bert Wood, is in Whyalla. There are two sisters, both well known to Pirieans-Mrs. H. R. Matheson, of Magill, and Miss Betty Wood, Whyalla.
The Sydney Morning Herald (N.S.W.)  18-9-1943
WOODS.—August 31, 1943, killed aircraft accident England. Pilot-Officer Clarence William, D.F.M (R.A.A.F.). beloved eldest son of Mr. T. W. and the late Mrs. Woods, The
Channon,  Lismore.
Northern Star (Lismore, N.S.W.)  6-10-1943
PILOT OFFICER C. W. WOODS
The Department of Air has advised Mr. T. W. Woods, The Channon, that his son, Pilot Officer Clarence William Woods, D.F.M., who was killed in a flying accident near Shippey Hill, Cambridge, England, on August 31 1943, was buried with full service honour's at Cambridge Borough cemetery, Cambridge, on September 6. At the time
of the accident P./O. Woods was flying a Stirling aircraft. Twenty-seven years of age, the late P./O. Woods was born in Lismore and completed his education at the Lismore High School. At the time of his enlistment he was engaged farming on his father's property at The Channon. In addition to his father, two brothers—Pte.
Alan Woods (A.I.F., 9th Div.) and Noel (The Channon)—and three sisters, Mesdames J. M. Kelly (Moree), R. J. Martin (Brisbane), and F. T. Thorburn (The Channon),
survive.
The West Australian (Perth, W.A.)  25-2-1944
WORTH. Irwin (Flying-Officer. RAAF). On February 21 1944. result flying operations over Germany, youngest son of Mr and Mrs E. Worth, 12 Riley-road. Claremont, brother of Len, Horace, Frances, Doris.
The Sydney Morning Herald (N.S.W.)  14-3-1945
YORKSTON.-429072, F./Sgt. lan Bailey Yorkston, R.A.A.F., lost his life in an air crash in Rutland, England, March 4, 1945, the beloved son of Mr. and Mrs. John Yorkston, of the China Inland Mission, and dear brother of Gordon and Neil, and dearly loved friend of Miss Addie Jones, aged 25. With his Lord.