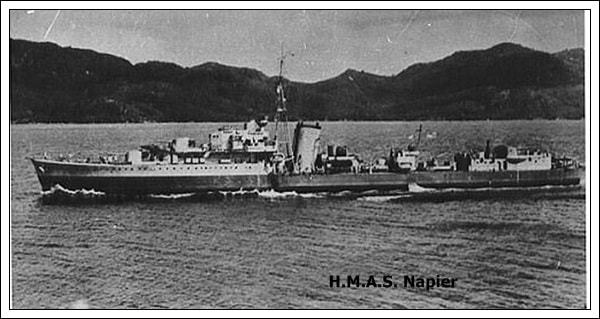 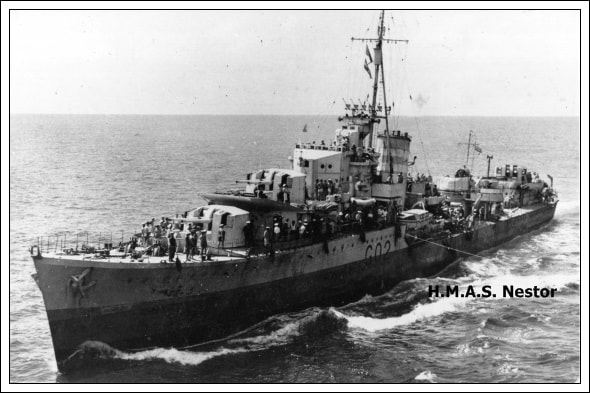 Lost in Action 16-6-1942
The Northern Miner (Charters Towers, Queensland) 1-7-1942
H.M.A.S. NESTOR
MELBOURNE, June 29.-The Navy Minister  (Mr, Makln) announced to day that' H.M.A.S. Nestor, the new Javelin class Australian destroyer, has been lost in the Mediterranean while acting as escort during the fierce naval and air actions on June 15. He said he regretted to announce loss of the destroyer, although, of the ship's complement of more than 200 R.A.N, personnel, only three were killed and one seriously Injured. Those killed were Stoker Petty Officer Jack B, Bulmer, R.A.N., of Bentleigh, Victoria; Leading Stoker Campbell V. Hill, R.A.N., West Perth, West Australia; Stoker Leslie J. Blight, R.A.N., Perth, West Australia. Wounded: Cook Roy Curtis, R.A.N., Marrickville, N.S.W.
The Nestor 'was one of the new Javelin class destroyers, Mr. Makin said. Since commissioned in 1942, the Nestor had taken valuable and active part In operations in the various naval theatres. The commanding officer was Commander A. S. Rosenthal, D.S.O of the Royal Australian Navy.
The Nestor was of 1660 tons displacement. She had a speed of 36 knots and her armament consisted of six 4.7 guns,  with six smaller guns and ten 21 inch torpedo tubes. 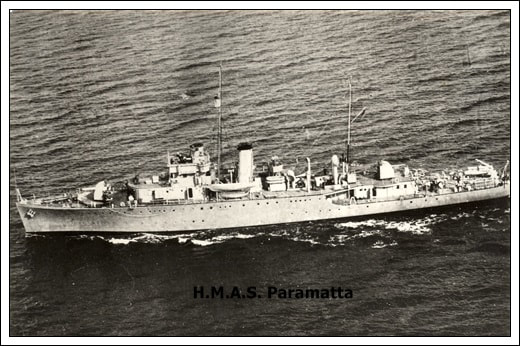 The Canberra Times 3-12-1941
H.M.A.S. Paramatta Torpedoed
141 Lives Lost; 20 Saved
Sunk while on Escort Duty
Other Ships Reached Port in Safety
The Australian sloop Parramatta has been torpedoed and sunk with the loss of 141 officers and men while on escort duty. This announcement was made last night by the Prime Minister (Mr. Curtin). The Parramatta carried a crew of 161, of whom only 20 have been saved.
The official statement on the loss of the Parramatta released by Mr. Curtin, gave no information on the location of the sinking.
H.M.A.S. Parramatta was under the control of the British naval authorities and joined the Mediterranean station in May, 1941.

The Prime Minister's statement was as follows:--
"The Australian Naval Board has received information that H.M.A.S. Parramatta has been torpedoed and sunk while on escort duties.
"It is with deep regret that I announce that the sinking was attended with considerable loss of life of Royal Australian Navy personnel. Of the total complement of 161 of H.M.A.S. Parramatta, 141 officers and men are reported missing, believed killed. The next-of-kin, to whom the Government and the Naval Board extend deepest sympathy, have been informed.
Sunk -  Sundra Strait 1-3-1942
Lost at Sea 20-11-1941
The Sydney Morning Herald 1-12-1941
H.M.A.S. Sydney carried 41 Naval Officers, one R.A.A.F Officer, 594 ratings, 5 Air Force men and a canteen staff of four. 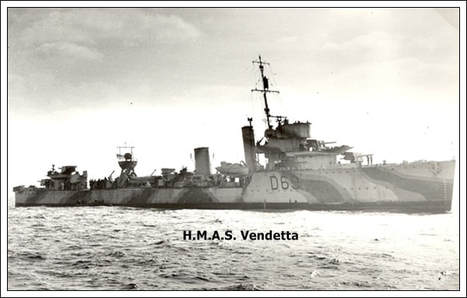 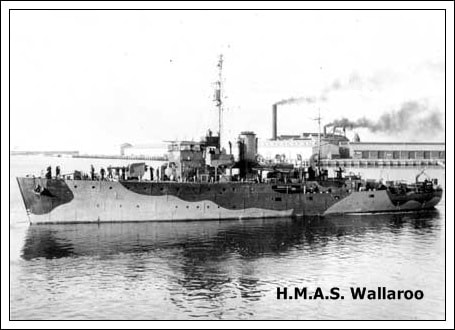 The West Australian 21-6-1943
MINESWEEPER SUNK.
KEPT AFLOAT 7 HOURS.
Crew's Fight Against Odds.
Struck violently about midnight by an Allied merchant ship, which tore a gash in her side, the Australian minesweeper, Wallaroo, was stricken as though with a torpedo, and only the efforts of her crew kept her afloat for the next 7 hours. Making about 8 knots astern just after the collision off the WA coast the small ship thereafter could only hold her own in the heavy sea and finally, just after 7 am, the order was given to abandon ship. Then for the first time her engine and boiler staffs came on deck. The hastily organised "tub and bucket brigade," which had been throwing water from the mess deck (because the suction pump was practically unless owing to the volume of water) and the others, including the WA wireless telegraphist, who had sent out messages until the water was round his knees, all went over the side. Flying sparks illuminated the scene when 10 minutes after midnight the bow of the merchant ship sliced the plates of the minesweeper with a rending crash and officers and men on deck, recovering from the shock of impact, saw the bow of a ship wedged 6 to 8ft into the wing of their bridge. The moon had just gone down, the night was pitch black and the merchant ship had been just a blur through the bad visibility. Suddenly she came out of the blackness a cable length away and almost at the moment the officers on the minesweeper's bridge realised she was bearing down on them the collision occurred. Men on the bridge fell like ninepins before the impact and, as members of the crew poured on deck the merchant ship, carried back by the sea, came in again and ripped through the minesweeper to the bridge. Three times she crashed into the mine sweeper.
Unable to Make Port.
In a moment the engineroom staff had the safety doors closed and seamen had the collision mat out as the ship started to list. The minesweeper's steering gear was disabled, she was making poor progress astern and as throughout the night she took in more water which began to come up to the scuttles--it became clear she could not make port. Leading-telegraphist  John Mahney, of Darlington, WA, had been constantly sending out signals and it was finally decided to abandon the ship. Be cause of her list no boats were launched and the men went over the side in their "Mae Wests," striking out to avoid suction and struggling on to pieces of wreckage or rafts wherever they could be found. The captain was last to leave, and as he did so one of the corvette's screws was right out of the water and the ship's keel was visible. There was an explosion and as the ship went beneath the waves there was another explosion. Thrown out of a passing aeroplane, which was on patrol searching for survivors and was the first plane to see them, 3 rubber floats enclosed in bags fell into the sea and as they splashed on the surface, men swam to them, ripped them open and set free the floats for use by the injured who were among the scores of survivors bobbing about in the heavy seas. The hopes of the men had died when about 8.30 a bomber passed southwards but only a few minutes later another plane saw them, and their spirits rose as the welcome plane remained overhead and directed the rescue ship to the scene. In the big sea the rescue ship plunged heavily and men in the trough of big waves could not see her mast. Finally the ship was among them. Friendly hands dragged exhausted men up the nets on her side, and some of her crew dived overboard to help those survivors whose endurance had almost come to an end. The men in the water had been under an ordeal practically throughout the night and all morning. Two members of the crew of the Wallaroo were killed: Motor Mechanic George William Garratty, of Casino, NSW, and Acting-Able-Seaman Daris Bernard Cowen, of Cygnet, Tasmania. A third member- Acting-Able-Seaman Joseph John Clarke, of Port Melbourne, is missing presumed drowned. Their next of-kin. have been informed. The other ship concerned, which suffered no casualties, reached port safely with only minor damage. 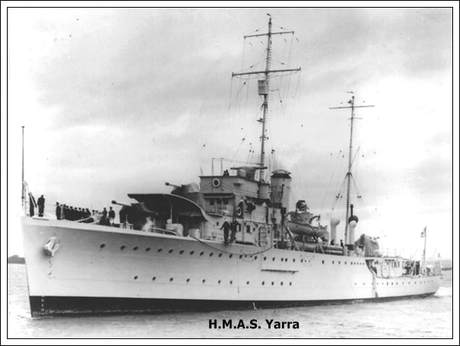 The Northern Miner 26-3-1942
H.M.A.S. YARRA
CANBERRA, March 24. H.M.A.S Yarra put up a gallant fight against overwhelming enemy forces in the highest tradition of the Australian
Navy, said Mr. Curtin to-day. He said this was shown by the stories of 13 survivors picked up from the raft and landed safely at a British
port. In her efforts to defend the convoy under her charge, the Yarra established for herself, and her ship's company, a place in naval history, along side such ships as H.M.S. Jervis Bay and others which had written epic stories that star our naval record.
Mr. Curtin said that, with a convoy of two merchant ships and a motor mine sweeper, the Yarra was attacked by three Japanese heavy cruisers and four destroyers, 30 miles south of Tjilatjap on March 3. All of the British ships, merchant and naval vessels put up a gallant resistance and continued to fight till overwhelmed by the great superiority of the enemy. In speed, number and gunfire.