Photos: Stephen Potts
The Propeller (Hurstville, N.S.W.) 19-4-1945
BEXLEY AIRMAN KILLED.
Mr. and Mrs. W. S. Ainsworth of Waratah Street, Bexley, have been In formed that their son Warrant-Officer Keith Walter Ainsworth who was serving abroad with the R.A.A.F., lost his life on April 7 in an aircraft accident in the vicinity of Kidlington. England. He was 22 years of age, and is survived by his wife in England. The late Warrant-officer Ainsworth was born In this district, and received his education at the Hurstville and Kogarah Schools. He enlisted In January, 1942, and had been on active service overseas for a year and eight months, operational and Instructorial. Two of his brothers are also serving with the Royal Australian Air Force, and are also natives of St, George, the three having attended Hurstville ,and Kogarah schools. Flying-Officer Len Ainsworth. D.F.C., enlisted in 1941, and has been on active service overseas for 2½ years. He is captain of a bomber in the Kingstord-Smith Squadron. The youngest -brother, Don William, enlisted in January, 1944. The three brothers were active members of the Hurstville Methodist Church and Sunday school. A memorial service will be held In the church on Sunday evening, April 29.

ROLL OF HONOR.
AINSWORTH. — 423577., Warrant-Officer Keith Walter Ainsworth, R.A.A.F., lost his life in aircraft accident in the vicinity of Kidlington,
England, on morning of April 7, 1945, loved husband of Marion' Dorothea, of Llantorriam, Monmouthshire, England, and dearly loved son
of Mr. and Mrs. W. S. Ainsworth, 36 Waratah Street, Bexley, and beloved brother of Len (R.A.A.F., England), Lyla (Mrs. Atkins), Don (R.A.A.F.), Yvonne, and Dorothy, and brother-in-law of Fred (A.I.F., abroad), aged 22 years. In God's keeping.
Warwick Daily News (Queensland)  3-8-1944
Flying Officer I. M. Angus Killed.
Advice.has been received by Mr and Mrs W. Angus, Locke street, that their second son, Flying Officer lan M. Angus, R.A.A.F. has been killed in an aircraft accident in England.  The late F/O Angus joined the R.A.A.F. in 1942, proceeding to Canada under the Empire Air
Training Scheme, and later to England for further training. At the time of his death he had almost completed his training and was about to engage in operational flights. The late F/O Angus was educated at the Central School and  the, Scots College, where he passed, the Junior and Senior examinations with high marks. Prior to enlistment he was a member of the staff of the Bank of New South Wales, Warwick.
Warwick Daily News (Queensland) 25-8-1944
Mr. W. Angus, Locke street, Warwick has received from , the Casualty Section, Department of Air, Melbourne, the following letter
in reference to the  death of Flying Officer Ian Mackenzie Angus. Further information, received from Overseas Headquarters, Royal Australian Air Force, London, states that the casualty occurred at Charndon,  Buckinghamshire, about 14 miles west of Leighton Buzzard, England, at. 5.15 p.m. "(local time) on the 30th July, 1944.  His funeral took place with, full Service honours, at 11 a.m. on the, 5th August,  1944, at Botley Cemetery, Oxford.
The Sydney Morning Herald (N.S.W.)  16-9-1944
ROLL OF HONOUR
ARTHUR.-August 31, 1944 (result of flying accident at Dale, United Kingdom), Flight-Sgt. Paul Druce Arthur, beloved son of Mr. and Mrs. W. H. Arthur, Y.M.C.A., Fortress Hqtrs., Box 333, Newcastle. He lives in Christ.
The Propeller (Hurstville, N.S.W.)  8-2-1945
Mr. and Mrs. A. G. Atkinson, of Planthurst Road, Kogarah, have been informed that their youngest son Sergeant Bruce Atkinson, who was serving with the Royal Australian Air Force abroad, was killed in an aircraft accident in England, on January 17. He was a member of the crew of a Wellington bomber, all of whom were killed. The deceased, who was 24 years of age, and had resided all his life in this district, leaves his wife and a young son he had not seen. The late Sergeant Atkinson was at one time a student at the Hurstville Technical School, and completed his air-training in Canada before proceeding to England.
Daily Examiner (Grafton, N.S.W.)  24-9-1943
CLARENCE RIVER AIRMAN.
Mrs. Jean Bailey, of Wharf street, Maclean, daughter of Mr. and Mrs. M. McKinnon, of Wharf street, Maclean, received the sad news from Melbourne by wire last night that her husband, Sgt. Eric George Bailey, of the R.A.A.F., had lost his life at Steeple Claydon (England) as the result of an aircraft accident. The late Sgt. Bailey is well known in Grafton, and prior to his enlistment was in the employ of Mr. F. R. Blood. He is a son of Mr. and Mrs. W. Bailey, of Queen street, Grafton.
The West Australian (Perth)  6-9-1944
BAIRSTOW. John Leslie (F/Sgt-Pilot, RAAF), killed August 30, 1944. as result of aircraft accident, Norfolk, England (late Government Printing Office, Perth) dearly beloved husband of Mary and darling Daddy of Lynette; aged 25years 10 months.
Too dearly loved ever to be forgotten.

BAIRSTOW. John Leslie (F/Sgt-PIilot. RAAF .-On August 30. 1944, as result of aircraft accident during exercise flight treasured elder son of Leslie K. and Mary Bairstow. and beloved brother of Jim (Wagin); aged 25 years 10months.
We can never forget.
Died on 17th March 1944, whilst on board Wellington Bomber BK352. The aircraft was on a training flight when it overshot the runway and crashed at Brackley airfield, Winchester.
The Advertiser (Adelaide)  14-3-1945
Mr. and Mrs. S. W. Barnett, of 62 East parade. North Mitcham, have been notified that their son, Flt-Sgt. Ross Frederick Barnett, 22, lost his life as a result of air-operations on March 6. He was a member of the crew of a Lancaster bomber which crashed in England. Flt-Sgt. Barnett was educated at the Mitcham and Unley High Schools, and at the time of his enlistment was on the clerical staff of the Lands Titles Office.
Died on 14th August 1943, whilst on board Wellington Bomber X9618, of 21 Op Training, which took off from RAF Moreton in the marsh on a training exercise. The aircraft crashed 75-miles north west of Oxford near Instone Drone. It was reported that the crash was caused by petrol starvation causing an engine to cut out.
The Western Australian (Perth)  13-3-1944
BIRD (Fit-Sgt Campbell David. R.A.A.F. I
On February 26, 1944 result of aircraft accident, England, Cam, dearly beloved husband of Ethel, 32 Epsom-avenue, Belmont.

BIRD (F/Sgt David Campbell, R.A.A.F.) killed in aircraft accident, England, February 26 beloved son of Edwin D. Bird (Katoomba. NSW); loved brother of Jean(Mrs Robt McLeod, Kalgoorlie).
The Advertiser (Adelaide) 1-4-1944
Mr and Mrs. F A Block, of Methuen street. Prospect, have been advised that their son, Sgt. Noel Herbert Block. 22. lost his life during the morning of March 25 as a result of an aircraft accident. He was a member or a crew of a Wellington aircraft which crash-landed at Little Horwood. England, while taking off to carry out non-operational exercises. Sgt. Block served with the AIF for 12 months, then transferred to the RAAF in January. 1943. He was educated at Nailsworth Central School and Muirden College, and was employed by Waymouth Service Company before enlisting.
The Advertiser (Adelaide)  4-4-1944
BLOCK.—On March 26, aircraft accident, at Little Horwood, England, Sgt Noel Herbert, beloved youngest son of Florence and Fred, Methuen st., Prospect, brother of Bruce, Highbury; Ralph, Military PWCC; Clare, Angas. RAAF. Vic
Died on 9th April 1945, on board a 630 Squadron Lancaster Bomber which had taken off from East Kirby to bomb an oil refining facility. Homebound, the aircraft was diverted due to poor weather and crashed at Foxton, 3-miles NW of Market Harborough, Leicestershire.
South Coast Bulletin (Southport, Qld)  22-3-1944
Sgt. Pilot Bradford Killed.
Mr. and Mrs. G. L. Bradford have received the sad news of the death of their son, Sgt. Pilot Colin, overseas, in an aircraft accident, on the night of March 14th. Sgt. Pilot Colin Bradford, who was 21 years of age, enlisted in July, 1941, and was called up in November of the same year. After preliminary training at Sandgate he went to Narromine, N.S.W., where he qualified as a sergeant pilot. He left for England in February, 1943, and there, as a member of the Bomber Command, he flew in different types of planes and bombers and eventually, was attached to the Tactical Air Force and was a pilot of a Sterling bomber. A native of Southport, be received his primary education at the Southport State and High schools after which he secured an appointment in the chief mechanical engineer's office, Queensland Railways, and was so engaged when he enlisted. Deep sympathy is extended the bereaved relatives but they have the consolation that their son died in the service of his country.
The flag at the Town Hall was flown at half-mast on Monday as a token of respect. 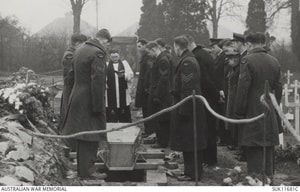